Trigeminal neuralgia is characterised by recurrent brief episodes of one-sided electric shock-like pains, sudden onset and termination, in the distribution of one or more divisions of the trigeminal nerve that are typically triggered by light touch on face. Trigeminal neuralgia is a rare condition that affects women more than men. Trigeminal neuralgia is commonly seen more in the older adult population. The incidence increases gradually with age; most idiopathic cases begin after the age 50, although onset may occur in the second or third decades or, rarely, in children.

The nerve starts at the midlateral surface of the pons, and its sensory ganglion resides in Meckel's cave in the floor of the middle cranial fossa. 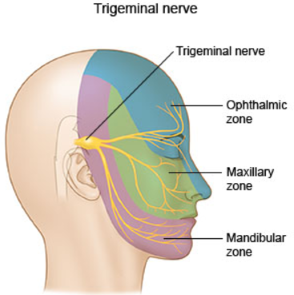 MRI of brain is useful to rule out any abnormalities such as compression of trigeminal nerve by artery, vein, cyst and tumour.