Achalasia is motility disorder of esophagus. Achalasia is a rare disorder affecting about 1.6 per 100,000 individuals. Both men and women are equally affected. The disease usually occurs between the ages of 25 and 60 years. The primary cause of Achalasia is unknown. Secondary cause of Achalasia can be due to Chagas disease caused by protozoan parasite, Trypanosoma Cruzi which occurs predominantly in Central and South America.

Inflammation and degenerations of nerves in the esophagus causes abnormal propulsion of food when swallowing. Biopsy of esophagus in Achalasia showed decreased number of neurons (ganglion cells) in the myenteric plexuses, and the ganglion cells that are often surrounded by lymphocytes. The inhibitory neurons that produce nitric oxide to relax smooth muscle of esophagus was affected which result food unable to propulse down the esophagus properly. The loss of inhibitory neurons at the lower esophageal sphincter causes the basal sphincter to rise causing sphincter unable to relax when food passing through.

The progression of Achalsia is usually gradual. Patient usually experience symptoms for years before seeking medical attention. The mean duration of symptoms to diagnosis was 4.7 years. Patients are often initially thought to have gastroesophageal reflux disease before the diagnosis of Achalsia is established.

Without treatment, patients with Achalasia can develop progressive dilatation of the esophagus. Approximately 10% to 15% of patients who have undergone treatment will develop late or end stage Achalasia and up to 5% of patients will require oesophagectomy. 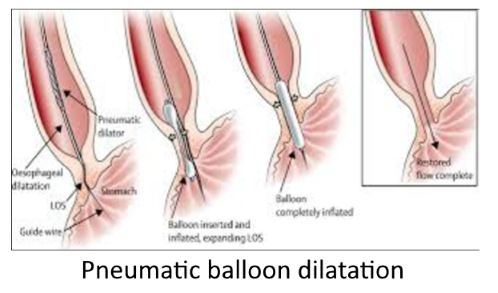