Meniere disease is thought to arise from abnormal fluid balance in the inner ear, which is the centre of hearing and balance. During an attack, the person experiences vertigo- a sensation that they or the world around them is moving. They feel dizzy and sick, their hearing is dominated by a hissing or roaring sound (tinnitus) and one or both ears feel full.

The inner ear contains a series of canals filled with fluid. These canals are at different angles. When your head is moved, the rolling of the fluid inside these canals tells your brain exactly how far, how fast and in what direction your head is moving. Information from these canals is passed along to the brain via the vestibular (balance) nerve. If your brain knows the position of the head, it can work out the position of the rest of your body.

The cochlea is the snail-shaped hearing organ in your inner ear, which is also filled with fluid. This fluid moves in response to sounds. Messages are passed along the hearing nerve to the brain to tell you what you are hearing.

There is no specific diagnostic test for Meniere disease.

There is no cure for Meniere disease. Treatment is aimed at relieving the symptoms

Interventation treatment only recommended in those who have intractable or progressive, unremitting symptoms that significantly impair their quality of life, despite medical therapy. 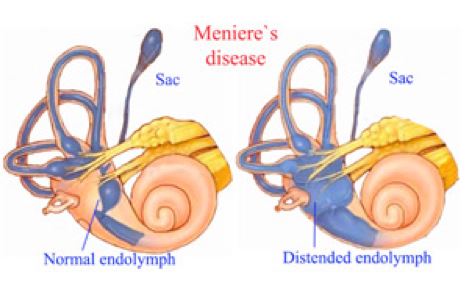