Eczema is a common skin condition affecting people of all age. The affected skin becomes dry, red and itchy. Sometimes, these affected areas of skin can become cracked, weepy and then scab over.

Eczema can be well controlled with appropriate skin care and topical cortisone treatment will need to be continued for many years.

Eczema can affect any part of body. Common areas affected are at flexural areas such as elbows, wrists, knees and ankles. Certain occupations involving hands washing, cleaning, handling tools and etc can cause Eczema rash on palms and fingers. In severe form of Eczema, the rash can cover the whole body. In rare situation, severe Eczema covering the whole body can cause Erythroderma (intense and widespread reddening of the skin due to inflammation causing skin to peel off in scales or layer which can sometimes be life threatening).

Gastroesophageal reflux disease is a condition where a person is experiencing reflux of acid from stomach into mouth. The person will describe the symptom as heartburn on his chest. This can occur from time to time. It is usually worse after eating certain food or laying down flat. Acid in stomach can be corrosive to the inner esophageal linnings. Repeat reflux can cause inflammation and ulceration to the esophagus causing pain when swallowing (dysphagia).

In patients who have severe GORD despite on maximal medical terapy, surgery can be considered to solve the problem. Surgery like Nissen fundoplication which can be done through laparoscopic (keyhole) surgery. 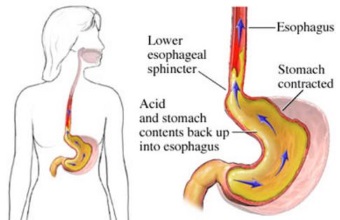